In my earlier article, Weteschnik's Understanding Chess Tactics, I reviewed Martin Weteschnik’s book of that title, and discussed has methods.  I recently found another interesting interview: 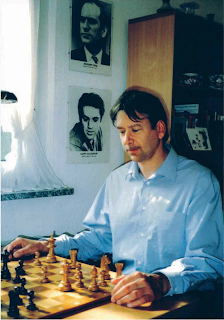 As I said in my earlier article, Weteschnik strongly advocates understanding tactics rather than just practising finding them.  In the newly discovered interview, he says:

“I also recommend simple endgames, as there you learn how to calculate without too many pieces on the board. Thereby you will learn not to ask yourself every five minutes: Oh, where was I (in my calculations)?”

When annotating a game in which he beat a 2345 as an unrated player Weteschnik said:

“The opening is a bit strange.  But I did not know opening theory and as an amateur player you do not need much of it (I know, this is the opposite to what a lot of players believe).  I already beat a couple of title holders, although I had not looked up any opening theory. Just play sound moves and develop your pieces.”

John Shaw may be the best modern example of adult chess improvement, see:

"Shaw, 37, provides hope for all non-prodigies. At the age of 19 Shaw was rated just 1700, the equivalent of a better than average Scottish club player. His first performance of note was first place in the Scottish Open at Aberdeen in 1991. He won the Scottish Championship in 1995, 1998 and 2000 and was awarded the International Master title with the 1998 victory."

This article was written in 2006, so Shaw was 19 in 1988, and won the Scottish Open three years later.  He reached IM ten years after being rated 1700, and GM eight years later.

I found Weteschnik’s rating history over the period when he reached FM:

Weteschnik played only one FIDE rated game after that:

His date of birth was 3rd August 1958, so he reached his peak FIDE rating of 2350 at the age of 39, which is 14 years after learning the moves.  The most striking feature of his record is the 256 point gain in the six month period in which he played 115 FIDE rated games (but his rating did fall a little prior to that).  In a comment to my previous article, Aoxomoxoa said that Weteschnik’s German rating has sunk to below 2000, but I do not have a link.

In view of the doubts raised in my previous article, Michael de la Maza - the Verdict?, I am now suspicious of any rapid adult improvement story!  Nonetheless, we know from Blackburne’s record, that it is possible to become a very strong player after learning the moves as an adult.  Back in the nineteenth century, there was no possibility of using a concealed computer, or having been almost as strong when a junior.  I knew a strong club player (about 2200), who spent a lot of time playing against a strong IM who was in hospital, and “started to become incredibly strong,” according to the IM.  He is now a GM. Big jumps in adult performance do sometimes happen.  It is also noteworthy that, unlike de la Maza, Weteschnik has not used his own rapid improvement to market his book.
Posted by Geoff Fergusson at 01:00