It has been brought to my attention that the results of all Michael de la Maza’s games are available on the USCF website:

Judging from the names of the tournaments, these results appear to be sorted into date order, with the latest first.  I copied the results into a spreadsheet, maintaining that order. I deleted the games against unrated opponents, which left me with 190 games.  I divided these games into batches of 19 games, in their assumed time order.  I worked out the average of the opponents’ pre-event ratings and de la Maza’s scores, for each of these batches.  I used these values to calculate a rating for de la Maza, using the Elo formula:

where s is de la Maza’s score and d is the difference between his calculated rating and the average rating of his opponents.  The results are summarised in the table:

I fitted a least squares line to the calculated ratings and plotted them on a graph: 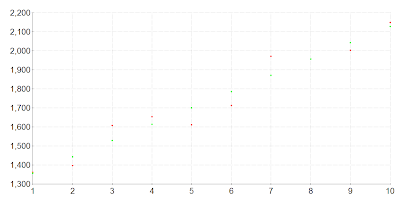 
(N.B. You can click on this graph to enlarge it.)  The red dots are the calculated ratings, and the green dots are the corresponding points on the least squares line.  The standard deviation of the slope of this line (calculated from the least squares residuals) is nearly twelve time less than the slope itself, so it is extremely unlikely that the improvement was caused by chance alone.  Five sigma is good enough for CERN!

(The square root of the mean of the squares of the least squares residuals is 59 Elo points.  I estimated this value to be 112 Elo points using my coin tossing model.  Since the proportion of draws in de la Maza’s games was only about 10%, I assumed a single random selection between a win or loss for each game.  I used the fractional score s as the success probability for this random selection.  I calculated the standard deviation of the points score as sqrt[19s(1-s)], and found the corresponding change in the Elo rating. The square root of the sum of the squares of these rating changes is likely to be an overestimate, but probably not by almost a factor of two.)  [See my later article Rating by Maximum Likelihood for more accurate rating calculation, which gives the performance the last 19 games as 2189.]

The graph shows that de la Maza progressed a constant rate, improving by over 800 points in three years, with no loss of steam at the end.  Here is his USCF Raiting History Graph:

On this graph, de la Maza's final rating is 2041, whereas on mine it is 2149 - over a 100 points higher.  This is because the final point on my graph is derived from just the results of his last 19 games, whereas the final point on the USCF graph includes earlier (less good) results.  If he had continued to play at the same level, these earlier results would have dropped out of the calculation, and his rating would have risen to my value - or more if he had continued to improve.

In his second Chess Cafe article de la Maza quoted Fischer in Chess Life: “Getting from Expert to Master is a difficult transition, but getting to Expert is about grasping tactics.” In the US, you become a National Master when you reach a USCF rating of 2200.  De la Maza was almost there.  By his account, he achieved that success by just playing chess and practising tactics.

See my next article for a comparative performance by the youngest US National Master.
Posted by Geoff Fergusson at 09:29