I recently bought a copy of Chessimo (see http://www.chessimo.com), and after two months work, I have finished the six inbuilt repetitions of Chessimo Engames 01.  It is now time to review Chessimo, and report my results.  Unfortunately, the six inbuilt repetitions of Endgames 01 are only the start.  Without revision, most of what I have learned will soon be forgotten.  A good rule of thumb is that if you learn something over x days, you will remember it reasonably well for x days, at which point you need to revise it. You will then have learned it over 2*x days, and need to revise it after another 2*x days, and so on…  The earlier Units of Endgames 01 have been learned over nearly two months, but the later Units have been learned over a much shorter period.  It will not be long before repetition 7 is due!  I found Chessimo useful, but I believe that it could be greatly improved upon. Nonetheless, it is better to have an effective but flawed tool, than a faultless but ineffective one.  The Chessimo interface is very attractive: 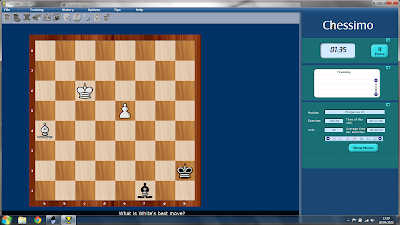 
(N.B. You can click on these images to enlarge them.)  By selecting “Training of the day,” on the “Training” menu, you can select the next Unit to train:
  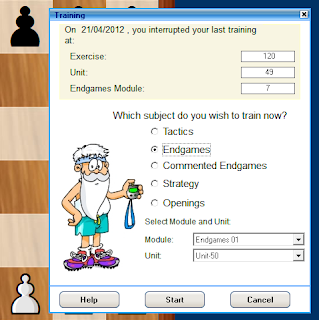 Chessimo allows you to select the type of training (Tactics, Endgames, Commented Endgames, Strategy or Openings), and the Module and Unit that you want to train.  If you select the Unit on which you were last working, Chessimo starts from where you left off.  I thought that the Commented Endgames would be the more complicated ones, and did not tackle them.  Chessimo does not include any commentary for the examples in Endgames 01.  Some Units are just repetitions of exercises in previous Units.  Endgames 01 contains 51 Units, which have from 60 to 180 exercises each, except for the last Unit which contains 480 exercises.  (I do not know exactly how many problems there are, because the "History" function did not work properly.)  A more even spread of effort across the Units would be helpful, but I did not find this to be a real problem.  If a Unit introduces new exercises, they are the first 20 exercises of the Unit, and these exercises are repeated at the end of the Unit.  It would be useful to have a unique number to identify each exercise, and a simple folder view of the exercises, so that exercises can be more easily accessed without using the inbuilt repetition.  Chessimo announces when the repetition of earlier exercises begins, provided that this feature has not been disabled: 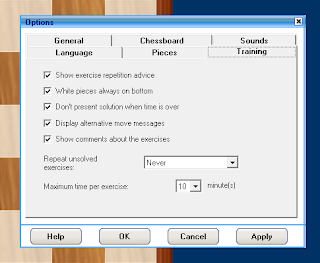 
Unlike Peshka, Chessimo offers the option: “White pieces always at the bottom.”  (See my review of  Chess Combinations for Club Players.)  This was very welcome, but it turned out that all the exercises in Endgames 01 had White to move.

Chessimo does not allow its time limit to be turned off completely.  I found this very annoying.  Mercifully, it is possible to select “Don’t present solution when time is over.”  If you do not tick this box, Chessimo not only times you out, but also shows the solution - and shows it very slowly.  It is possible to set the maximum time per exercise to 10 minutes, but Chessimo still allows only 1 minute 40 seconds for the final repetition, which sometimes was not enough.  Some of the solutions are 20 moves long and not at all obvious.  There is little value in memorising a solution that you do not understand.  Going back to the beginning of the exercise, and re-entering the moves does not take a lot of time, but still wastes time!

When you enter a move, Chessimo offers only one response.  It does not test you on alternative defences, and the only way of getting help on alternative defences is by computer analysis.  Fortunately, Chessimo writes the FEN for each exercise to the clipboard, which made it easy for me to analyse the positions using Shredder Classic.  I found it convenient to set this program to show the principal variations for the three best moves.  (Chessimo does allow you to play either side of the exercise against the onboard engine Crafty.  Peshka also has Crafty onboard, but does not allow you to play both sides.  Nonetheless, it is much easier to analyse with Shredder Classic.)  White’s win in the exercise illustrated in the first diagram above is not at all simple.  The solution uses subtle manoeuvring with gains of tempo using zugswang positions, and an attack on the opposing bishop, to prevent the Black king from reaching the Chenturini position.  It took me more than one attempt to understand the solution, even with Shredder.  Shredder told me which moves won and which moves lost, but it did not tell me why.  What I needed was not just the moves, but an explanation in terms of (potentially reusable) higher level concepts.  I eventually managed to work this out for myself, but some comments would have been very helpful.

Chessimo’s moves are frequently not the only way of winning, or even the easiest or quickest way of winning.  There are frequently many winning moves.  Sometimes Chessimo will respond with: “That move is very good and achieves the same result, but please play the indicated alternative.”  Mostly, however, Chessimo simply refuses alternative moves, however good they are.  I kept scurrying off to Shredder to see whether my move works, which was very time consuming.

Chessimo’s solutions occasionally do not work against the best defence.  It would have been very helpful if the losing move were marked with a question mark.  As it is, it is easy to mistakenly assume that Chessimo’s solution works against all defences.

I found that I did not speed up very much from one repetition to the next (taking about a minute per problem on average), but my understanding and accuracy did improve.  A disadvantage of Chessimo training is that it encourages you to guess moves and see whether Chessimo will accept them, rather than working out a complete solution in your head and checking it.  I was less likely to do this on later repetitions.  The solutions often involve a sequence of natural moves leading to a crunch position in which tactics decide the game.  Initially, I tended to just try the natural moves and work out the tactics when I came to the crunch position.  Later on, I was doing a better job of looking ahead.  I appeared to be more efficient at tackling the later exercises.  This was, at least partly, due to my becoming more efficient at using Shredder, and making a bigger effort to understand each exercise when I first saw it.  Nonetheless, I would also like to believe that my general endgame skill was also improving.

With Chessimo, if you take twice as many sessions to complete a Module, the repetition intervals also double.  This contrasts with my tactics training experiments, and standard learning systems like SuperMemo, where the intervals remain the same.  See my earlier articles A Year of the Rabbit and Lessons from SuperMemo.  In my tactics training experiments, I found that omitting a repetition on day 5 did not have a significant effect on long term memory retention.  For the current version of Supermemo, the first repetition is at 6 days when the repetition intervals successively double.  Research carried out by the creator of SuperMemo also found that six repetitions at 18 day intervals offered better long term memory retention than six repetitions at expanding intervals.  When you complete the relevant Unit in one session, Chessimo’s second repetition will be after only a few hours, and will contribute almost nothing to long term memory.  Nonetheless, without closely spaced repetitions, the absence of commentary would be an even more serious problem.  I would have remembered very little of my computer analysis - or what I had learned from it - from one repetition to the next.  Good endgame books have a big advantage here.  They include explanations, and all the variations that are important for understanding the solution.   This allows relatively long initial repetition intervals to be used, which improves long term memory retention.

Overall, I believe that my Endgames 01 training was worthwhile, but I do not believe that it is worth starting Endgames 02 in the immediate future.  The combination of Endgames 01 and book learning should be enough for now.  Chessimo may be more appropriate for practicing material that you have already learned, than it is for learning new material. Endgames 01 addresses pawn endings, (mostly) same colour bishop endings, rook endings, some knight endings, and queen versus pawn.  A bold marketing claim made for Chessimo is that it is “for chess players who want to make progress, but have little time for studying.”  I found that the main problem with Chessimo was that it is so time consuming!

Also see: Chessimo on the iPhone and iPad
Posted by Geoff Fergusson at 01:01