I used Fred Reinfeld’s 1,001 Winning Chess Sacrifices and Combinations for my first experiment with the Expanding Repetitions method, so I will give it a brief review.  The book is an old classic that is still in print more than fifty years after it was first published. It consists almost entirely of diagrammed problems and their solutions, and wastes little time on idle talk. 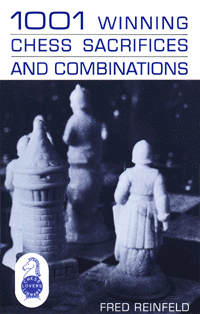 The problems are in random order of difficulty, grouped by theme, e.g. pinning and knight forks.  The positions are mostly well chosen, with the feel of real game positions.  The level of difficulty ranges from very easy examples, to a small number of difficult ones.  The book commendably includes a lot of crude tactics, like chasing pieces with pawns, that are practically important, but often do not find their way into other books.  On the other hand, it has more than its fair share of queen sacrifices and brilliant but untypical combinations that the average player is not likely to be able to analyse completely from the diagram.  Some of the combinations are also very similar or even the same.  Most tactics books are like this, however!

The positions (but not the full solutions) are available free on the web:

The book predates computer checking, and the solutions are often not the only way of winning, and sometimes do not work.  It also is sometimes a bit of a lottery as to which defences Reinfeld includes.  Some would say this adds to the realism and keeps you alert, but others would say that it is a real pain!  Reinfeld's solutions are usually the best continuation, however, and as Lasker said, “if you find a good move look for a better one.” A significant disadvantage of this book is that its better problems are very widely copied by other books.

The book uses descriptive notation, which might be a problem to some.   The quality of reproduction of the current Chess Lovers’ Library edition is poor, but that was not a serious problem to me.  The pages of this edition also fall out, but the book is better as a series of problem and solution sheets.

The book clearly has its limitations, but I had already spent time working on it with my failed attempt at the 7 Circles, and the wide range of difficulty in the problems was ideal for my experiment.  (I wanted to know how well the Expanding Repetitions Method worked both for easy problems and for harder ones.)  For further tactics book reviews, see my later article: Dan Heisman's 7-10 Basic Tactics Books.
Posted by Geoff Fergusson at 06:46