In my earlier article, Michael de la Maza Statistics, I showed that MDLM’s rating performance increased at a steady rate from 1362 to 2149 over three years, with no sign of slowing at the end.  [See my later article Rating by Maximum Likelihood for more accurate rating calculation, which gives the performance the last 19 games as 2189.]  (N.B. His USCF rating graph understates his final performance because the USCF uses both past and current results to calculate ratings.)  In my subsequent article, Samuel Sevian Statistics, I compared MDLM’s results with those of the youngest player ever to become a US National Master (USCF 2200).  Sevian’s progress was about 10% faster, but (unlike MDLM) he slowed as he neared 2200.  Even Hikaru Nakamura (a previous holder of this record) slowed as he neared 2200, and he is currently rated above the World Champion.  MDLM’s results look too good to be true to me, particularly as others have not been able to replicate them using his methods:

(See my earlier article, 7 Circles, for a critique of these methods.)  AoxomoxoA did some excellent research, and posted his findings as comments to my earlier article.  He found that MDLM had a PhD in computer science from MIT, see:

It is clear from this document that MDLM had experience of computer chess programming.   This looks suspicions, in view of MDLM’s very tactical playing style.  Is there any evidence that he might have used a computer to make his moves?  AoxomoxoA found this picture of him playing at the 2001 World Open:
  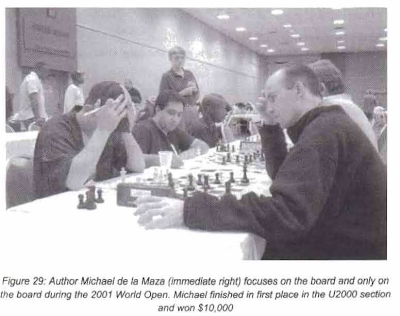 (N.B. You can click on this diagram to enlarge it.)  MDLM is wearing a big jacket in this picture, whereas all the other players are in shirt sleeves.  AoxomoxoA found that this was his custom when playing chess:

I recalled that the first time we played was a Tuesday evening at the Metrowest Chess Club, and that he had come to play dressed in a hooded black cloak.  It was mysterious. The hood stayed up during our game, and to add to the mystique, his left arm never moved from under its cover.

It seemed as though I was playing the Headless Horseman, using his hidden arm to hold on to his horse under the table.  As I recalled this, de la Maza leaned back in his chair, and laughed out loud like a little boy.  It took him a few moments to settle down. When he did, he explained.

“Basically, I busted my arm at one point. At chess tournaments people are constantly bumping into you, walking behind you or what not, so I decided to put on a protective vest…but it was a bit extreme, I must say.”

Note also that MDLM won $10,000 from just one tournament.  AoxomoxoA found that blackjack card counting was invented by a professor at MIT, who appears to have been the first to use a concealed computer to card count at a casino:

In addition, Thorp, while a professor of mathematics at MIT, met Claude Shannon, and took him and his wife Betty Shannon as partners on weekend forays to Las Vegas to play roulette and blackjack, at which Thorp was very successful.  His team's roulette play was the first instance of using a wearable computer in a casino — something which is now illegal.  The wearable computer was co-developed with Claude Shannon between 1960-61. The final operating version of the device was tested in Shannon’s home lab at his basement in June 1961.

This is amazing with 1961 technology!  AoxomoxoA also found another article which shows a concealed computer that was used for card counting:

He found that the MIT blackjack team had as many as 80 players at its peak, see:

MDLM may not have been aware of any of this, but the technology used is certainly relevant, and perhaps it also says something about the culture at MIT.  There is a long history of people being caught using computers to cheat in chess tournaments:

One of the earliest known cases of using technology to cheat was in 1993 at the World Open.  An unrated newcomer wearing headphones used the name “John von Neumann” (matching the name of a famous computer science pioneer), and scored 4½/9 in the Open Section, including a draw with a grandmaster and a win over a 2350-rated player. This player seemed to have a suspicious bulge in one of his pockets, which appeared to make a soft humming or buzzing sound at important points in the game.  When he was quizzed by the tournament director, he was unable to demonstrate even a rudimentary knowledge of some simple chess concepts, and he was disqualified.

Nonetheless, this was clearly an unsophisticated attempt, and the name the contestant chose suggests that he was not seriously trying to deceive.  There can be no doubt that a serious attempt at deception on the level of that used in casinos would have been successful.  Indeed, simpler technology would have sufficed.

MDLM’s performance progressed from 1362 to 2149 very nearly as fast as the fastest junior, without slowing towards the end.  This put him on course to be the first World Champion who learned the game as an adult.  According to his account, he achieved this result by doing beginner level board vision exercises (the "Micro Drills"), playing chess, and solving a thousand problems seven times.  Another possible explanation for his results is that he used a concealed computer, which would also explain his very tactical style.  I leave you to come to your own verdict!
Posted by Geoff Fergusson at 01:01