Overall, I scored 84% at an average of 15 seconds per problem.  Here is the corresponding chart for my recent revision pass: 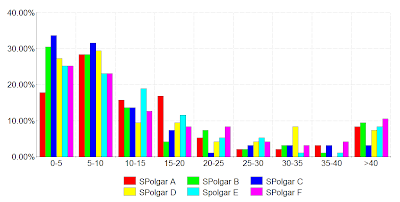 
Overall, I scored 94% at an average of 13 seconds per problem.  There is some indication that number of problems that I solved in under 5 seconds increased from one batch to the next, as it did on the previous chart.  My performance (9 months after my last revision), was better than that on my first attempt; but not as good as it was shortly after my previous 7 relatively closely spaced repetitions.  I learned these problems over a period of 3 months, so revision was due after about 3 months, and well overdue.  I appear to have become more careful since my earlier experiment, even when doing a speed test, which is encouraging.  It is, however, also possible that I remember the harder problems better than the easier ones as a result of spending more time puzzling over them.

I decided not to time myself on the Ivaschenko problem set.  This saved me some study time, and also allowed me to concentrate more on accuracy rather than speed.  I did, however, make a list of the problems that I failed to solve (or got wrong), and the problems that I did not solve efficiently.  I am considering doing some extra work on the problems that caused me difficulty, both for this problem set and for some of the others.
Posted by Geoff Fergusson at 01:01