I have finished my current round of endgame training with: Pandolfini’s Endgame Course, Albert & Krogius’ Just the Facts!, and Chessimo Endgames 01.

I have now been through Pandolfini three times.  Most of the book is easy, and I can do the simple king and pawn endings in my sleep.  There are some tricky sections at the beginning, notably K+B+N vs. K and K+R+B vs. R, and I am still having difficulty with a few of the rook endings.  (K+B+N vs. K is rare in practice, but the winning technique is straightforward to learn.  K+R+B vs. R is also rare, and difficult even for GMs, according to Albert & Krogius.  Rook endings are the most common of all endings, and therefore much more important than either of these.)  I did the first two passes through Pandolfini in odd moments, and the third pass took me three days.  I am due for another revision after about two months. 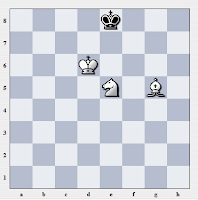 I have been through the core of Albert & Krogius four times.  This book is harder than Pandolfini, so I needed an extra pass through.  I covered the first and the last two chapters less thoroughly than the others.  The first chapter is rather elementary, and the last two have some very complicated examples with rather thin annotation.  The fourth pass took me 2 weeks (2*5 days).  I did all the exercises on the fourth pass.  They are mainly tactical, rather than tests of endgame knowledge.  I found some of the exercises very hard, but got the majority completely right.  This book is also due for another revision after about two months.

Revising Chessimo was easier than I had expected, and I completed the task in a week (5 days).  The next revision is due after about 4 months.  Chessimo let me select each Unit in turn, and go through the first twenty exercises with no trouble.  (When I first returned to Chessimo it asked: “You have not been training for while, would you like to do a quick review,” but I preferred to drive the process manually.)  I feel a bit more positive about Chessimo, having found that the revision is easy.  Revising Albert & Krogius was much harder, but I expect that harder is better here.

I believe that the three types of training complement each other well.  Pandolfini provides drilling in the basic stuff, and all the examples are easy enough to treat as problems. Albert & Krogius provides wide coverage of the easy and the harder stuff, but with relatively few examples of each type.  Chessimo Endgames 01 gives hands on practice on 480 examples, but only tests one variation within each exercise.  I also did a fair number of endgame exercises when I revised Ivashchenko's Chess School 1b, and will no doubt revisit Coakley's Winning Chess Exercises for Kids, which also includes endgame exercises, at some stage.  I am beginning to tire of endgames, so it is time to move on.  I have plenty of good endgame books for future study, notably:

I believe that my endgame training has been worthwhile.  I have done a good job of learning the basic endings, and the main winning methods for the more complex ones. My ability to visualise and calculate simplified positions has also improved.  Unfortunately, my board vision for middle game positions has gone to pot!  I can easily remedy that though. I currently have two background tasks: working through Weteschnik’s Understanding Chess Tactics (yet again), and solving some problems of the day:

My next project is O’Kelly’s Improve Your Chess Fast.  This is an old favourite of mine.  It is O’Kelly’s get you to 2000 correspondence course in book form.  It comprises a series of lessons which provide well annotated games (and some endgames), and some good but badly checked problems at the end of each lesson.

I have solved the (solvable) problems many times before, and worked my way though the whole book a few times over the decades.  When I worked in Europe as a young man, I took a copy of this book with me, along with a copy of Modern Chess Openings and a pocket chess set.  Despite not having played chess for over a decade, I was soon playing at about the 2000 level.  The book, probably did not do what it said on the back cover for many of its readers, but it seemed to work for me!  I am a lot older now, but perhaps it still has some magic left.  Second hand copies are available for pennies.  Perhaps it needed a story about secret Belgian training methods that would have trained a string of World Champions, if only they had not been so secret!
Posted by Geoff Fergusson at 01:01