Dan Heisman put me off the scent this book, by recommending it for players rated under 1300 USCF.  See his Recommended Chess Books page:

I took this to mean that the book is useless for anyone rated over 1300 USCF. Nonetheless, I saw a number of glowing recommendations on the web by players who also recommended other rather advanced books.  Could Dan have got it wrong here - or was I reading too much into his up to 1300 recommendation?  The “Look Inside” on Amazon did not help me very much, and neither did the various reviews, but I noticed a good used copy on offer for less than Amazon’s postage charge.  At that price, it did not matter if it went straight in the bin, so I ordered it.  I was pleasantly surprised when it arrived. 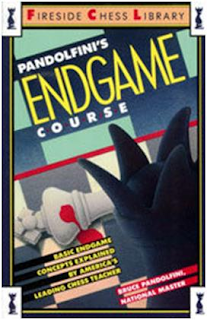 In one of his Novice Nook articles, Heisman writes:

“I have heard from students about instructors teaching players rated 1200-1300 Philidor and Lucena positions. Yet I know someone who lost an easily drawable Philidor position because he did not know the technique and never heard of it. My point? That player was me: I had been playing tournament chess for 5½ years and my USCF rating was about 2100! Sure, if I had known the technique I would not have lost, but the point is that I got to 2100 without ever even hearing about the Philidor draw because such specific knowledge is only marginally useful (not useless!) and I was pretty good at each of the Big Five.”

See: http://www.chesscafe.com/text/heisman19.pdf.  However, Pandolfini not only contains the Philidor position, but also many more difficult positions.  Clearly, there was one 2100 player who did not know everything in this book!

This 319 page book provides a more detailed coverage of the most basic endgame positions than most one volume introductions to the endgame.  It is cheaply produced and the diagrams are a little fuzzy, but I did not find this to be a problem.  The book presents 239 endgame positions, giving each one a snappy title that summarises the main theme. It follows this with a detailed explanation of the solution, and the bare bones solution at the foot of the page.  Despite this simple formula, the book manages to be both interesting and engaging.  The book has more than its fair share of typos, but there is an errata online:

I noticed a couple of typos that were not in the errata and a couple of mistakes in the errata itself, but I did not find these to be problem.  Some of the solutions are as many as 15 moves long, but the winning method usually becomes clear within half as many moves. There were only one or two positions where I had to resort to using a board on the first time through.  I found Pandolfini’s explanations to be very clear.  For some of the more complicated endgames, e.g. K+B+N vs. K and K+Q vs. K+R, he presents a series of positions, using the earlier solutions as building blocks for the later ones.  I found this very helpful.  The positions from the book are available in CBH format:

This link says that Shredder can read CBH files, but I could not see how to do that with Shredder Classic.  Chessbase Light will read CBH files and is free, but that would something else for me to learn!  Fortunately, it turned out that I did not need any help from Shredder.

I believe that this book is useful both for learning the basic endgames, and as a set of test positions for revision.  My plan is to work repeatedly through the book until I can solve all the positions quickly and reliably, and revisit the book as and when necessary.  I found the book to be both practical and useful.  I am sure that other club level players will find it useful too.  It is cheap book, especially if you buy it from Oxfam.  If you find that you can solve all the positions correctly in seconds, at first attempt, you will not have wasted much time or money!