To find a comparison for Micheal de la Maza, I searched for the youngest US National Master, and turned up Samuel Sevian: 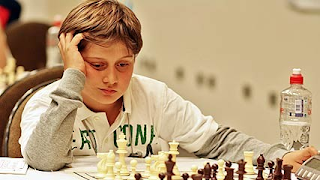 Here are his game statistics:

To provide a direct comparison with de la Maza, I constructed a graph on the same basis as in my previous article, using the data for 2007, 2008 and 2009.  I omitted the last four games, and games against players without pre-event ratings, to leave 10 batches of 33 games.  The resulting graph is shown below: 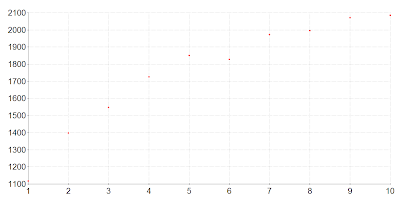 The curvature of this graph is not so pronounced as it is on the USCF graph over a longer time period, but is still clear in the 1400 to 2100 range of the de la Maza graph, which was a close fit to a straight line.

Sevian’s rate of progress was a little faster than de la Maza’s claimed rate of progress (he could have deliberately depressed his earlier performances).  Nonetheless, Sevian was a very exceptional small child, whereas de la Maza was an adult.  Blackburne learned chess at 18, and became one of the strongest players of his day, but his success has not been repeated in the modern era.
Posted by Geoff Fergusson at 07:39