The time arrived to start looking in detail at the opening.  I have always played 1...e4 in the past, but had trouble with the Ruy Lopez.  I looked at some books, and settled on Neil McDonald’s How to Play Against 1.e4: 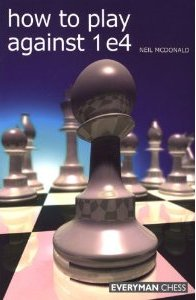 This book advocates the French Defence.  Here is a helpful review by US NM Bill Geary:

He says:  “The book shares the look of the "Starting Out" series, but is definitely a cut above most from that series.”  This is indeed a Starting Out book in all respects, except that of the title.  Perhaps there was a change of mind, or perhaps Starting Out books were not selling well that month!   This book contains 240 pages in all.  The main sections are:

The Fort Knox variation is included as an easy to learn option.  Choosing the Steinitz, McCutcheon and Tarrasch variations roughly doubles the workload.  The back cover says the book is suitable for improvers, club players and tournament players.  In England, club players and tournament players are the same people.  Improvers are mostly juniors - adult players usually worsen with age!  So in plain English, the book is aimed at juniors and club players.  That could include anyone from beginner to GM. The publisher’s name (Everyman) says it all.  They want to sell a copy to everyone!  In reality, this book is probably most suitable for chess players in the 1600-2100 range.

I have now worked my way through McDonald’s book twice.  On my second pass, I found most of the games referenced in the notes, and played them though on my ipad.  I will have to work my way through the book again in due course, both to retain what I have learned, and to increase my understanding further.  I will also have to practice what I have learned.  Perhaps I will play some of the positions against Shredder on a subsequent pass. The greatest virtue of this book is that it provides me with a realistic learning plan.


Davies’ book is based on illustrative games rather than strategic explanation, which is good, but it also has a mind boggling level of detail.  I decided that mastering the material in this book was too big a task for me.


Houska’s book provides strategic explanation and opening variations and few complete games.  I was not keen on this approach, but this book is admirably well researched and written.  I felt that this book was a practical option for me, but that studying games rather than opening variations would be a better use of my time.

McDonald’s book was the clear winner for me.  I needed a chess study plan rather than an opening study plan, and could not justify studying more material than this book.  I could have looked at other books, but that would have taken more time.
Posted by Geoff Fergusson at 01:00