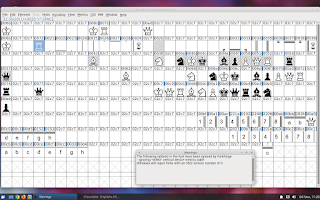 My program worked well using the Unicode chess symbols in the 'Dejavu Sans Mono' font, but I wanted to use the more attractive 'Chess Alpha' font. There are free downloads for Chess Alpha on several sites. I downloaded the Chess Alpha font and unzipped it. I created a directory called .fonts in my home directory using the file manager and moved Alpha.ttf into this directory. (The procedure for installing fonts is different on Windows.) I found that there was no empty light square symbol in the font, which made it useless for displaying chess positions. (The space character was too narrow.) I viewed the font using:

The font file did not open with BirdFont. I was able to open it with FontForge, and I managed to fix the font.

Many of the glyphs were encoded by several Unicodes (02c7 was encoded by many Unicodes). There were no free Unicodes that I could use to add a space glyph with the same width as the other board symbols (which was 2048). The solution suggested on the web was to use an encoding that did have free space. I tried the first one in the list.

Some of the Glytyh boxes now had no Unicode and a grey cross in the box. Right click on the first one. Select Glyph Info... Replace the character in the Unicode Char field with a space. Glyph Name then becomes "space" and Unicode Value becomes "U+0020". Click OK.

The Glyth box now showed 0020 as the Unicode. Right click on the box and select Set Width. Set Width To: shows as 2048. Click OK. The cross disappears from the 0020 box.

Select File > Generate Fonts... Click the Generate button. Ignore the warnings. FontForge said that it had fixed an error that would cause problems with Windows (something to do with OS/2). That error does not appear to be related to my changes. There is no need to save a FontForge file.

The Chess Alpha font now worked beautifully for displaying a chess position. I did not test the figurine symbols or the board edgings.

Posted by Geoff Fergusson at 01:29