My next project was with Richard Palliser’s Complete Chess Workout.  This book provides 1,200 problems under the chapter headings:

*  Warming up
*  Attack!
*  Opening Tricks and Traps
*  Skill in the Endgame
*  Fiendish Calculation

The problems are both interesting and instructive and the diagrams clear, with a good price per problem.  Palliser says that the problems were computer checked, and that book was written for club players.  The solutions are much more accurate than those in Fred Reinfeld’s 1001 Winning Chess Sacrifices and Combinations, but not nearly as complete as those in Jeff Coakley’s Winning Chess Exercises for Kids.  The overall level of difficulty is a little harder than either of these two books.  The solutions are often less clear cut, sometimes winning just a humble pawn.  Here is problem number 547: 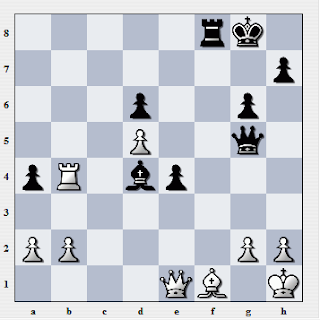 Palliser gives the solution as 1...Qd2, when Black wins a rook because of 2.Qxd2 Rxf1#. This is certainly the simplest solution, but Shredder Classic gives:

Clearly, Palliser’s solution is not the only way of winning.  Accordingly, this position would have been rejected by the authors of many tactics books, and Coakley would have adjusted the position to make the solution unique.  However, practical chess positions do not always have clear cut solutions.  Nonetheless, positions with clear cut solutions are more helpful when starting out.  Palliser’s problems are not sorted by difficulty, which makes them more realistic, but perhaps less useful for systematic training.  I recognised a significant proportion of the problems from other books.

I worked my way through the book once without a formal time limit - omitting the Fiendish Calculation chapter - the previous chapters were hard enough!  I wrote down the solutions in algebraic notation, before looking at the solutions in the book.  I am complete rubbish at algebraic - having been brought up on descriptive - but I am getting better!  The book ends with ten tests, each giving points out of 22.  The scoring is given by the table:

Most of the players contributing to this average will have been club players, and strong English clubs often have an IM on top board. My performance at Palliser’s tests therefore suggests a rating of about 1800-1900, which is consistent with my practical performance fifteen years ago.  I did not show any obvious improvement, as a result of working through this book, and did not expect to do so.  Solving a thousand or so problems once is not likely to have a measurable effect, after all the training that I had already done, and the results of Palliser’s tests are undoubtedly subject to considerable random variation.  My time on Test 1 was about and hour, whereas my time on Test 2 was about two hours, albeit with interruptions.  Perhaps the pattern memory that I had already built up faded, or perhaps training without a time limit made me slower!

Overall, this is a good book, and good value for money.  Nonetheless, Coakley is likely to be more appropriate for players below the strength of the average English club player, and is still likely to be useful for stronger club players, but Palliser has much to recommend it at this level.  (N.B. I review some easier tactics books in my earlier article Dan Heisman’s 7-10 Basic Tactics Books.)
Posted by Geoff Fergusson at 01:01