I first read Martin Weteshnik’s Understanding chess Tactics about a year ago, and found it both helpful and engaging.  I have since been through most of the examples several times.  Weteschnik does not claim that his examples are original, and I found many of them in other books.  The general level of his examples is about the same as those in Fred Reinfeld’s 1001 Winning Chess Sacrifices and Combinations. 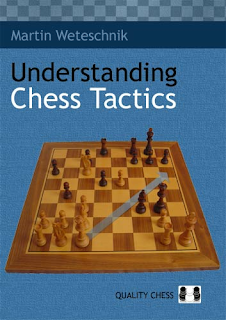 Weteschnik says that the club players he was coaching had great weaknesses in their tactical play, and that this was not fixed asking them to solve a huge number of problems. Nonetheless, with his coaching, they improved by an average of 100-200 rating points, and were promoted to higher leagues twice in three years.  Clearly, this is not a scientific trial. An exacting critic would say that his students might have improved by as much or more if Weteschnik had used different training methods; or might not be impressed by an improvement of 100-200 points over three years.  Nonetheless, its a good inspirational story!

The main emphasis of the book is on understanding chess tactics, rather than just solving problems.  Weteschnik says “do not exercise what you do not understand.”  Nonetheless, he fully accepts that you need to practice once you do understand, see:

The main theme of Weteschnik’s book is what he calls “status analysis,” by which he means studying the position to find clues for possible tactics.  The book addresses this topic better than any other that I have seen.

Understanding tactics is an important part of the learning process, but that it is not enough in itself.  You need to practice until your thought processes become automatic. Nonetheless, as sportsmen say: “practice does not make perfect - perfect practice makes perfect.”  Practicing finding tactics badly is not a promising approach.

Reading explanations can be helpful, but working things out for yourself is better, and the examples in this book are only a subset of those that a strong player needs to know. Sooner or later, you are going to have conduct your own investigations.  You need to be able to spot most simple tactics (including the uncommon ones) and most common tactical possibilities (including the complicated ones) on sight.

The diagrams in this book are large and clear but a little non-standard.  Nonetheless, I did not find them difficult to use.  The book was not intended to be used as a problem book. Nonetheless, I like to study a position before I read the commentary, to see what I can work out for myself.  The publisher has not been helpful in this regard.  None of the diagrams say who is to move.  You often have to read a long way through the text to find out, and in so doing, are told the solution.  In addition, a sizable proportion of the diagrammed positions are not suitable as problems - either because a bad move has to be made before the problem position arises - or because the sacrifice is speculative and does not win against the best defence.  This fault could easily have been remedied.  Prior to reading this book in detail, I marked each diagram to indicate who was to move, and whether the position was suitable for use as a problem.

Overall, this is an excellent book, and deserves its high reputation.  Will it greatly improve your chess?  Perhaps not by itself, but I it could make an important contribution.
Posted by Geoff Fergusson at 01:02