As I said in my previous post, Hyperterminal was discontinued by Microsoft from Vista onwards. I decided to try to connect to the Novag Citrine using CuteCom on Ubuntu Linux. I downloaded Cutecom from the Ubuntu Software Centre. (I did not tick "Tools for zmodem/xmodem/ymodem file transfer".) I booted Ubuntu with the Citrine connected to my PC, as described in my previous post, again with the Citrine switched off. I opened a terminal with Ctrl-T, and typed:

The list included "pl2303 converter now attached to ttyUSB0", which is the entry for my USB-to-Serial converter. I then typed:

This brought up the CuteCom window. I typed /dev/ttyUSB0 into the Device field, selected 57600 Baud, keeping 8 Data bits and 1 Stop bit. I left the Handshake boxes unticked. I found that I also needed to select "CR.LF line end" from the pull-down at the bottom of the window. I then clicked the "Open Device" button, after which I turned the Citrine on.

I typed P into the Input field, and hit the return key. The Citrine responded with the position. 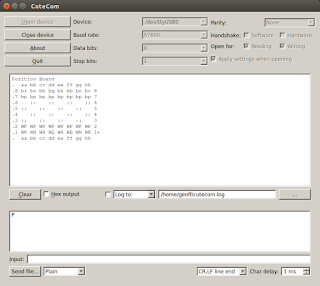 In the above, I had to use sudo to gain superuser privileges. This was because my user account did not belong to the dialout group, which I verified by using the terminal command:

I fixed problem this with:

I was then able to run CuteCom from the launcher, or by typing just cutecom in a terminal, without using sudo and giving my password. On returning to CuteCom, I found that the window was populated with my settings. PuTTY is a popular alternative to CuteCom that will run on Windows. It can be downloaded from here:

http://www.chiark.greenend.org.uk/~sgtatham/putty/download.html
Posted by Geoff Fergusson at 02:31