Stockfish DD with the Shredder Interface

Having got Stockfish DD working in Arena 3.0, I decided to install it in the Shredder user interface, which is common to my Shredder Classic 4, and the more expensive Shredder UCI and Deep Shredder. Please see my previous article for the details of downloading Stockfish DD and setting up the necessary files. To install Stockfish DD, select Extras → Engines → Install Engine, select UCI Engine, click OK, set Engine to the path name of the Stockfish DD executable, and click OK again.

Shredder describes the newly installed engine as Stockfish DD 64 bit SSE4.2 (1024 MB), and recognises the two CPUs on my PC. I set Threads to 2 in Extras→ Engines → Engine Options, which can also be reached by Extras → Options → Engine Options. I ticked Use Engine Book in Extras → Options → Book Options. The hash table size was already set to 1024 MB in Extras → Engines → Hash Tables. The engine currently in use can be changed by right clicking in the analysis pane at the bottom of the window and selecting Change Engine.

When I restarted Shredder, the number of threads was set back to 1, and the CPU usage dropped correspondingly.  I sent an email requesting help to support at shredderchess. Stefan Meyer-Kahlen responded very quickly. The cause of my problem was that Stockfish was telling Shredder that it wants one thread rather than two, despite my setting in the polyglot file. I set the number of threads to 2, clicked the Create Engine... button at the bottom of Engine Options, and saved the new engine as Shredder DD 2 CPU. This new engine kept the two threads on shutdown.

The Shredder board is a little less attractive than the Arena board: 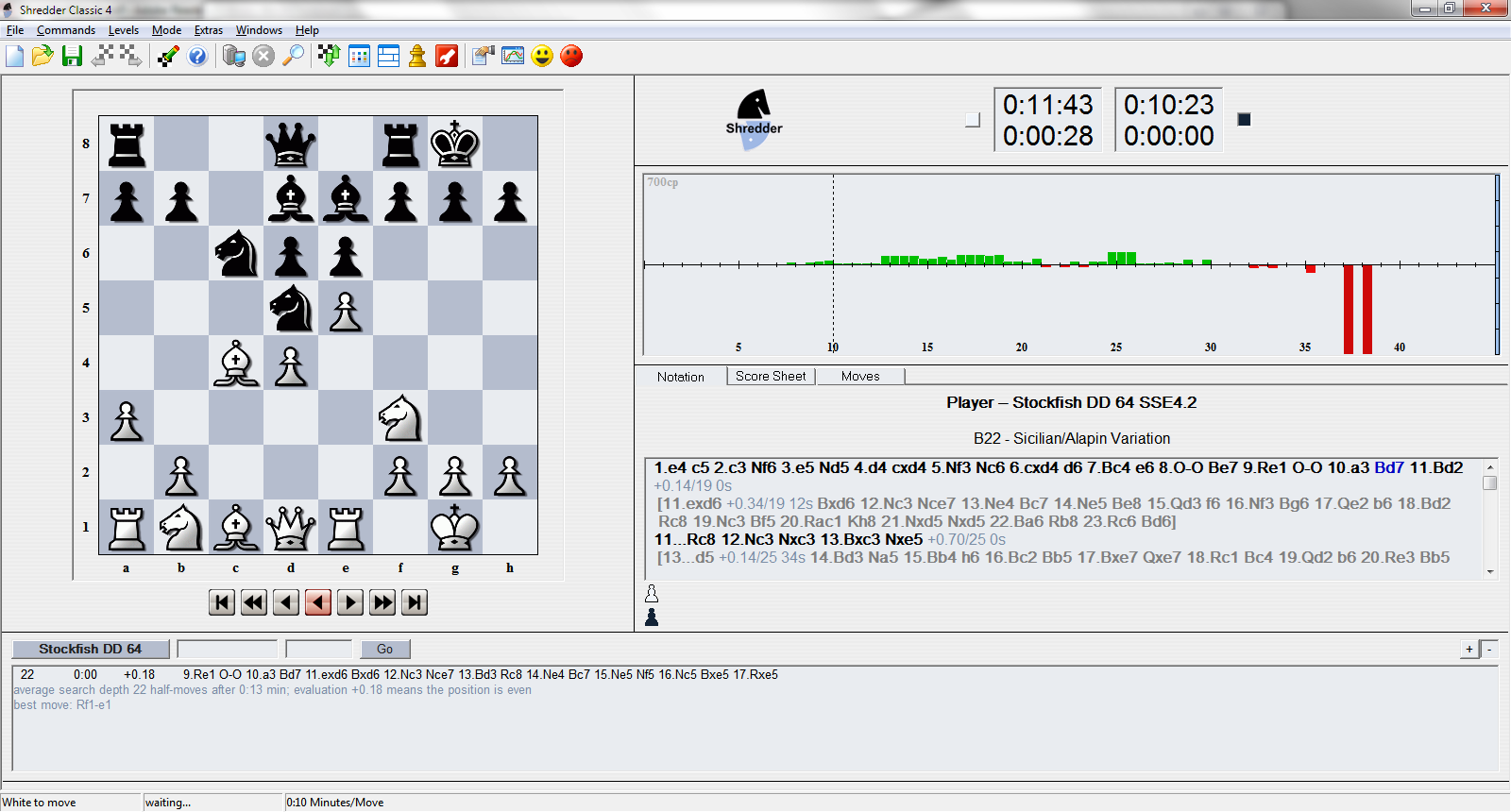 This screen shot shows the results of Analyse Game for a game that I imported from the clipboard. Shredder incorrectly calls the bar chart showing the engine's evaluation after each move a histogram, which confused me until I read the manual very carefully. When in the opening book, the moves pane shows ratings and rating performances in addition to the percentage scores for each choice of move:

Nonetheless, Chessbase Online on my iPad has access to a much larger database. The Shredder Classic 4 User Manual can be found at:

This manual is much clearer than the Arena Help text, largely because the Shredder interface is more standard and less confusing. I find Shredder easier to use than Arena 3.0 and less troublesome. It also appears to have much fewer bugs. It has less features, but is likely to satisfy most player's needs. You get regular on-line updates, and the support is good. The Shredder engine has a reputation for having a more human playing style than most engines, and playing a better simulation of a weaker human player. Currently, even Deep Shredder is about 200 ELO points weaker than the strongest engines, and Shredder Classic 4 is about 200 points weaker still on a 2 CPU machine (which is about 60 ELO points weaker than a 4 CPU machine). (See CCRL and CCRL Shredder.) Nonetheless, it is still very strong by human standards, and you can easily add other engines and opening books. Shredder Classic 4 is well worth considering at EUR 29.99. I am still using it.
Posted by Geoff Fergusson at 00:00