Chessimo on the iPhone and iPad

I previously reviewed the old Windows version of in my earlier article: Chesimo Endgames 01. This version of Chessimo provided:

The exercises and comments were compiled by the Brazilian GM Gilberto Milos. The more recent iPhone and iPad applications additionally include 101 strategy tips, opening training and a collection of games. All versions of Chessimo attempt to make the user to repeat the exercises six times. See my critique of their approach in my earlier article. For the strategy exercises, my approach was to tackle the all exercises in all three modules, without repetition; and repeat this process as often as I thought necessary.

As a result of AoxomoxoA's comments to a previous post, I decided to investigate the iPhone and iPad versions of Chessimo, called Chessimo and Chessimo HD in the App store. The respective Apps are free, but activation of all the modules costs £5.49 ($8.97) in both cases. Individual modules can be activated at a lower cost. This is much cheaper than the Windows version, which cost me $49.90 two years ago. (N.B. There is no Windows version on sale currently, but a new version is promised.) I was horrified when I first saw the iPhone board: 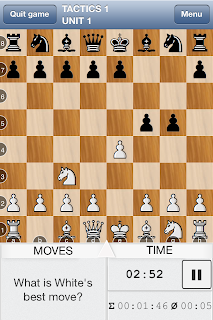 The algebraic coordinates a-h and 1-8 were very distracting and unsightly. I looked in vain on the Settings screen for a button to turn them off. It was only later that I found that I could turn them off from Menu button on the screen above. The resulting screen was much more tidy: 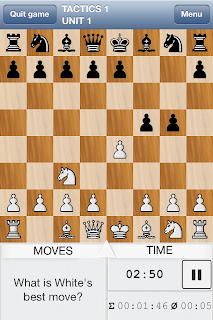 Nonetheless, the board was rather small and indistinct on my iPhone 4S. I addressed this problem by deploying my rarely used Terms & Conditions glasses. The board was then OK. Nonetheless, the free open source Smallfish app displays a much clearer board on my iPhone. (I use  IOS 7 version with the brown colour scheme and piece set SFAlpha.) I do not need my Terms & Conditions glasses for this one. I tried loading the iPhone version of Chessiomo on my iPad, and got blown up pixelated images of the iPhone screens, which were not at all attractive. In contrast, the board for the iPad version was excellent: 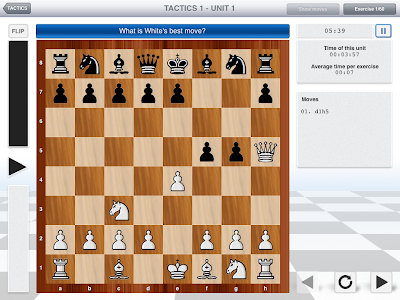 I decided to buy all the modules for the iPad version. The iPad screens are not all perfect. Here is the screen for selecting a Unit from within a Module: 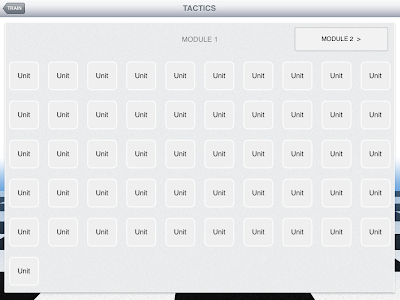 They really should have labelled the buttons with the unit numbers rather than just the word "Unit." Nonetheless, since the Units are in rows of ten, this is not a great problem. If you attempt to drag a piece, but fail to drag it out of its square, Chessimo has the irritating habit of telling you that your move is incorrect. If you try to move a piece of the wrong colour, it not only informs you of your mistake, but annoyingly highlights the piece to be moved.

The old Windows version has the advantage that the FEN for each exercise is written automatically to the clipboard, which is useful for analysis with an external engine. The old Windows version also has an option to play each exercise against the inbuilt Crafty engine. Neither of these options is available with the iPad version. I used Smallfish on my iPhone to carry out analysis, when I thought this was necessary.

The comments for the Strategy exercises are written in very broken English, with copious typos. The word "explore" is consistently used place of "exploit", for example, and "quality" is used in place of "material." I did not have any great difficulty in understanding what was meant in most cases, but found that there was often too little explanation. Chessimo provides useful exercises, but is not a substitute for a good strategy book.

When I bought the iPad modules, I was told that I had bought a "single activation of all the modules." When I tried Restore Purchases in the iPhone version, I was asked for my Apple password, but nothing happened. I did not even get an error message. The modules that I had bought for the iPad were not loaded into the iPhone version. A negative way of looking at this is that it violates the principle that content, once bought, should be available on all my Apple devices. Nonetheless, since the Chessimo Apps are free, this is fair enough. Shredder for the iPhone and Shredder for the iPad are both separate Apps that have to be paid for separately. Hopefully, if you buy modules for the iPhone version on the iPhone, you will be able to restore them for the iPhone version on the iPad. I am at all not confident, however. When I bought the old Windows version, I was not offered any instructions for moving my purchase to a new PC, and Chessimo has reputation for failing to respond to enquiries.

The first method works fine for the first pass through a Unit. However, on the second pass, Chessimo visits the first problem in the Unit (which I expect is a bug), and then moves on to the first repetition in the Unit, rather than the second exercise. It is possible the select each exercise individually from a pull down menu, but that is pain. There is, however, a "Reset your training status" button which would fix this problem by wiping out you training history.

The second method hits difficulties if you have already tackled some on the exercises on another machine. Chessimo allows you to select only exercises that you have already solved within a Unit. A more minor problem is that Chessimo allows only one sixth of the selected time per exercise in the final Unit. This problem can be circumvented by setting the time allowed for each exercise to six times the value that you actually want. The maximum time that you can set per exercise with the iPhone and iPad versions is 30 minutes, which gives 5 minutes per exercise in the final Unit. This is thankfully much more generous than the maximum allowed in the old Windows version.

Overall, I was impressed with the iPad version. It was much more convenient to use than the Windows version, because the iPad itself is so much more convenient to use than my Windows laptop. Nonetheless, it is not so convenient to analyse using an engine, which I previously found to be necessary for many of the endgame exercises. All the versions of Chessimo put obstacles in the way of you implementing your own repetition schedule. Nonetheless, the bottom line is that you get a lot of exercises for your money.
Posted by Geoff Fergusson at 00:00