I decided to subject my chess problem server rating method to a practical test.  I do not have real user data, so I decided to carry out a Monte Carlo simulation.  I did this using the method that I described in my previous article: Simulating Solution Times and Scores. I used an OpenOffice spreadsheet to generate times and scores for 50 users solving a set of 500 problems.  Each user solves each problem once.  The user ratings were uniformly distributed in the range 1500 to 1990.  (The rating of user number u was 1500 + 10*u, where u ranges from 0 to 49.)  The problem ratings were randomly sampled from a normal distribution with mean 1500 and standard deviation 300.  The perceived rating for each user was sampled from a normal distribution with the problem rating as its mean, and a standard deviation of 50.  The target time at which the problem ratings are valid was 30 seconds, and I applied a time limit of 120 seconds to each problem.  I took the K value to be 200 for this experiment.  The chart below shows a typical histogram of solution times: 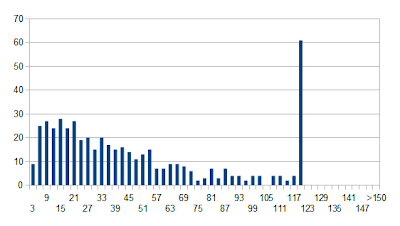 (N.B. I showed in the previous article that, with this simulation, the distribution of solution times is independent of the user rating.)  I later discovered that I had no solution times under two seconds, so rounding the solution time up to the next integer may not have added to the realism.  I saved the resulting data to a CSV file with the format:

Here is a short extract from the file: 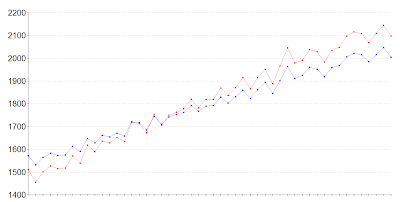 
The first iteration under estimated the ratings of the weaker users and over estimated the ratings of the stronger users.  The user ratings for the next two iterations are coincident with the blue line on the scale of this graph.  (The root mean square difference between the user ratings from the first and second iterations was 57 points.  The corresponding difference from the second and third iterations was 1.4 points, and 0.027 points for the third and fourth iterations.  This calculation error reduced by a factor of about fifty from one iteration to the next.)

The ratings calculated by this method are all relative to an arbitrary base rating.  I therefore normalised the user ratings from the calculation so that their average was equal to the average of the correct ratings used to generate the data.  The chart below shows the correct user ratings (blue) and the normalised estimates (red): 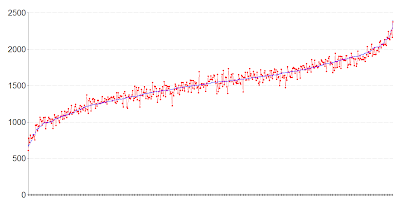 The principal variables used in the rating calculation are:

Here is the Java code for calculating the user ratings: 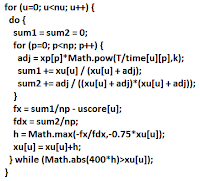 Here is the Java code for the problem ratings: 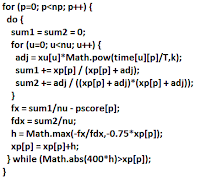 I have  added some refinements since my earlier articles: Rating by Expected Score, and A Simpler Server Rating Method.  The code above always converges from any starting value, and does one more iteration than is necessary to achieve approximately one Elo point accuracy.
Posted by Geoff Fergusson at 22:40