Improve Your Chess Fast (IYCF) and its successor Assess Your Chess Fast (AYCF) are based on correspondence course that circulated in France and West Germany from 1970. IYCF is claimed to take its reader from being “a weak club player” to “an expert with FIDE rating of 2040-2120.”  It is difficult to compare ratings in different times and places, but I believe that 2000 is more realistic.  The book contains twelve lessons that were originally circulated at three week intervals.  Realistically, you have no chance of getting to 2000 in 36 weeks unless you are at least 1700 already.  (1700 is nearer the level of an average club player than a weak one, in England at least.)  I also think that it is also fair to say that the modern beginner / novice / kids books are better for players below 1700.  AYCF is intended to take its reader to Master level and is much harder. 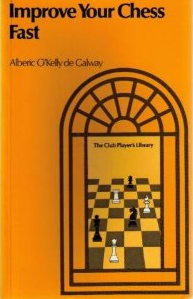 
The lessons in this book consist of annotated games and problems, along with some often inspiring general advice about how to approach the game.  The book has only 206 pages, but the material is shoe horned in, with virtually no white space.  Albert would have filled three times as many pages with the same material!  This degree of compression makes complex variations very hard to follow.  IYCF had served me well in the past and I had fond memories of it.  The games and problems are both interesting and instructive, and the book also has an eccentric charm.

One of the book’s many eccentricities is that the Contents is on the last page.  It took me a long time to realise that it had a contents list at all.  The contents list describes the twelve lessons as:
This list is not terribly informative.  The games within each lesson generally illustrate many themes, and the problems are not at all related to the lesson headings.  The general flavour of the games is that of straightforward cut and thrust chess.  O’Kelly did not believe much in explanations.  He thought that rules of thumb to be too simplistic, and let the games speak for themselves.

The book really does begin by explaining the rules!  Nonetheless, even the first lesson contains interesting games, and good problems.  There is some progression of difficulty through the book.  The first few lessons are relatively easy, but some of the games in the later lessons are very complicated.  Lesson 7, for example, includes Dubois vs. Steinitz London 1862:

This is a very interesting game, in that archetypal novice opening, the Giuoco Pianissimo. The analysis of this game comes from the Finnish International Master Book, and is very detailed, but this game is not at all easy!  Some of the annotation of other games is less good.  Important variations have been ignored in some positions.  I checked a couple of them on a computer and found that my moves were as good or better than those included in the text.  A Grand Master should have been able to do better.  I could only find a couple of the games online, but I looked only when I had trouble following the analysis with one board.  Nonetheless, most of the material appears to be original.

The problems are interesting and at the right level for me, but contain lots of errors.  I have not seen a good proportion of the problems elsewhere, but there are also some old chestnuts.  The book was not written by a native English speaker, and the language is very amusing in places.  The diagrams also have Jokers for bishops!  The book contains many typos.  Batsford appears to have just copied O’Kelly’s manuscript without any editing.  Perhaps O’Kelly demanded same approach as Cromwell famously did for his portrait: “warts and all.”

On this occasion, I worked through all the games in the first nine lessons.  The endgames in Lessons 10 and 11 look interesting, but I have been doing a lot of endgame study lately.  The final lesson is about De Groot, which is rather peripheral, and I have solved all the problems many times before.  I believe that this exercise was instructive, but it was also hard work!
Posted by Geoff Fergusson at 01:00