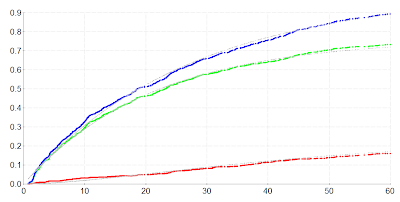 In my earlier article, An Important Discovery, I proved that the two parameter model estimated my average time to find a solution that is always correct as b/a = 21.0 seconds / 0.764 = 27.5 seconds.  However, according to the blue curve above, my average solution time, with failures, is 27.1 seconds, which is only marginally smaller than b/a.  This small difference would not be not enough to allow me to complete all my failed solutions correctly.  There is clearly something wrong with the two parameter model.

I decided to divide the 60 second time limit into 5 second intervals, and work out the number of problems that I solved within each successive interval, and the corresponding number of successes:


Clearly, the number of problems that I solved within each successive time interval fell steadily.  Overall, I got 660*100%/805 = 82% of my solutions right, but my success rate declined.  The next chart shows my success rate for each of the five second intervals: 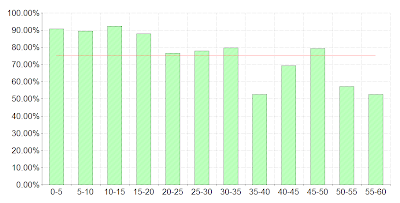 
It is very clear from this graph that my success rate fell with time.  The average value for the 5 second bands is 75.5% which is roughly the same as the value of a (76.4%) shown by the horizontal red line.

The mathematical form of my success rate curve is already determined the two cumulative probability distributions:

The corresponding probability distributions are:

My success rate is therefore given by:

(This calculation divides the 60 seconds into an infinite number of infinitely narrow intervals, rather than twelve 5 second intervals above.)  This calculation indicates that my success rate dropped off exponentially with time.

Why was b/a nearly as large as c in this experiment?  This happened because the problems that I solved incorrectly took me almost as long as the two parameter model allows for me to solve them correctly.  If I had continued with these problems, I would have eventually have got them all right, and they would then appear on my cumulative distribution of successful solutions, but with larger values than this model implies.  The tail end of this cumulative distribution must rise less rapidly than this model predicts. Nonetheless, I solved 73% of the 900 problems correctly within the time limit,  and the simple model is a good match up until the time limit.  The remaining 27% of the problems would take longer to solve than the two parameter model predicts.

The cumulative probability distributions Psolved and Pcorrect can be used to calculate the average time that I used in solving problems up to any time t.  Let N be the number of problems.  The expected time used on the problems that I had solved (correctly or incorrectly) up to time t is the integral of N*t*exp(-t/c)/c from 0 to t.  Integrating by parts gives:

The expected time used on the problems that I had not solved by time t is:

The expected time used per problem up to time t is the sum of these expressions:

The average time T used per problem up to time T is therefore:

The fraction of the problems that have been solved correctly by time t is:

The graph below plots s against T (in green), and compares the results with the corresponding experimental values (in red, see my earlier article Rating vs. Time on the Clock): 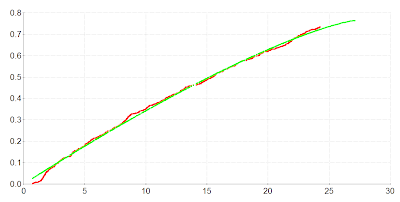 When T = 0, this becomes a/b, which represents the fraction of the easier problems solved per unit time.  The curve for s becomes horizontal when T = c.  Solving for T gives: