I used Jeff Coakley’s Winning Chess Exercises for Kids for my next experiment, so I will give it a brief review. 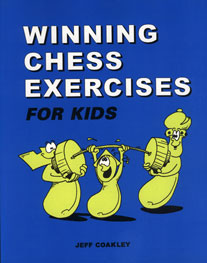 This is the hardest of the four Coaklies and has a blue cover to distinguish it from the others.  These books are not cheap, but the cost per problem is reasonable for this book. The diagrams are very clear, but it is difficult to get the pages to lie flat.  A hard back would be a significant improvement, but no doubt more expensive!  Dan Heisman says this is possibly the best intermediate problem book for all ages - “don't be fooled by the ...for Kids part of the title.”  He says that he receives more positive feedback on this book than any other book that he recommends.  He also says that the book is suitable for players rated 1300-1650.  Nonetheless, it should also be useful for significantly stronger players, but they will need harder books too.

The main section of the book contains 100 pages of problems with nine problems per page.  The problems increase in difficulty throughout the book.  The first three problems on each page are checkmate problems, and the next three are combinations to win material.  The final three are: a defensive problem, a general problem and an endgame problem.  The general problem can be anything, but the objective is usually to secure a positional advantage.  Coakley says that the three checkmate problems on a page share a theme, as do those for winning material.  Fortunately he does not follow this too rigorously.  I found that, in most cases, the previous problems did not give too much of a clue.  Each page also has a tenth bonus question - e.g. “How many Knights are needed to checkmate a King in the middle of the board?” - but I did not bother with these.  The problems in this book are all White to move, which is not good, but it is not a serious disadvantage either.  The combinations that are labelled as “Material” all win more than a pawn - which makes them more dramatic - but winning humble pawns can also be important!

My statistics suggest that the level of difficulty of this book is about the same as Sergey Ivashchenko’s Chess School Stage 5, but the range of difficulty is wider.  Coakley’s combinations are typically five moves deep.  The overall level of difficulty is similar to Reinfeld’s 1,001 Winning Chess Sacrifices and Combinations - but Reinfeld contains a much higher proportion of both trivial problems and difficult problems.  Reinfeld also has many errors, whereas I did not find any in Coakley, except for those noted in the very short Errata on his website, see: http://www.coakleychess.com/  The range of difficulty in Coakley is about twice as wide as in Susan Polgar’s Chess Tactics for Champions and Chess School 1b - but Coakley has almost twice as many problems as either of these books.

I did not notice any duplicate problems.  Coakley says that the majority of his problems are original compositions, and that the others were taken from various sources and altered, usually beyond recognition.  He says that these changes were made in order to clarify the solution, eliminate needless complications, adjust the level of difficulty, or otherwise make the problems more instructive.  However, practical chess does not always offer neat and tidy solutions!  I found that a significant proportion of the problems were either the same as problems that I have seen in other books or very similar.

Coakley recommends that the reader write down his answers for each page before looking at the solutions, and says that the book is intended to be at least a years study.  His solutions are very detailed, showing why alternative moves do not work, and sometimes discuss many related positions.  There are 103 pages of solutions for 100 pages of problems.  My speed training did not do the book justice, and it would repay more leisurely study.

Coakley also has twelve small sections of “Lilly’s Puzzlers” - named after Lilly Pawn. These are typically completely crazy checkmate compositions.  I must confess that I have not tried these, but they look amusing.  I did not find the cartoons in this book quite as amusing as in Coakley’s green book - Winning Chess Strategy for Kids - but I liked the one in which a white rat informs us that no animals were harmed during the making of this book!

Overall, this is an excellent book.  Coakley’s books provide a sound grounding in chess strategy, with a whopping 3,000 problems.  The endgame treatment is more detailed in many respects than Alburt and Krogius’s “Just the Facts!” - which claims to cover all that is needed up to Master level.  Coakley has trained a string of national junior champions, so his material is battle proven.  I do not know of any series of books by a single author to compete with this one.
Posted by Geoff Fergusson at 01:01