I downloaded a copy of Chess Combinations for Club Players (CCFCP), when it was being offered at a discount and the price per problem looked good.  CCFP does indeed have 2,056 problems, but they are very repetitive.  I counted what appeared to be three exact duplicates in six problems on one occasion!  Even when the problems were not exact duplicates, they were usually very similar to others in the set.

Convekta, the publisher the CCFCP software, says that it is suitable for club players and intermediate players, 1400–1800 Elo.  By comparison, Convekta says Chess School 1b is suitable for Elo 1200-1500.  This suggests that CCFCP should about 300 points harder than Chess School 1b - but most of the problems are about 300 points easier!  The problems in CCFCP are grouped into folders labelled Level 3 to 17, with the problems at the higher Levels given higher ratings.  Nonetheless, I found that I scored 98%, irrespective of the Level, which suggests that there is no significant difference in difficulty between the Levels.  Here is an example of a problem rated 2800: 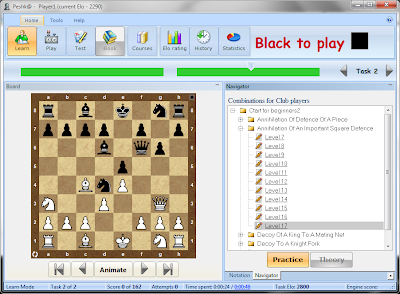 (N.B. You can enlarge the diagrams by clicking on them.)  The solution to this problem is obvious, given the hint “annihilation of an important square defence”.  Black plays 1...Bxa3 and meets 2.ba with 2...Nxc2+ forking the king and rook.  There are problems harder than that in Bain!  If that is a 2800 problem, I am Magnus Carlsen!  Does that mean that all the problems in CCFCP are trivial?  Not entirely.  The only continuation on which you are tested is the game continuation, and with very few exceptions, that is trivial.  However, for about 10% of the problems, there is a defence that is more problematic.  Here is an example: 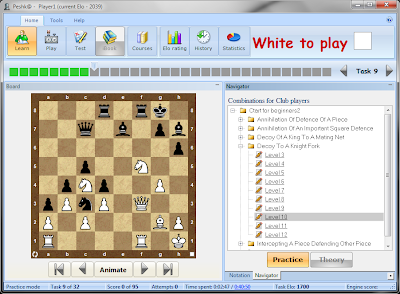 The only continuation on which you are tested here is 1...Qc6 Qxc6 2.Nxe7+ Kh8 3.Nxc6, but what about the other defences?  1...Qa7 is trickier, but defeated by 2.Qe6+  (if 2...Rf7 3.Nh6+).  1...Qd7 is also trickier, but is defeated by 2.Ne5.  Nonetheless, given the hint “decoy to a knight fork,” what else could the solution be?  This problem is at Level 10, but there are problems that are at least as tricky at the easiest Levels.  Nonetheless, these problems do not have higher ratings than completely trivial problems in the same folder!

The program’s scoring was rather generous, giving me credit for finding the remaining moves when I failed to find the first move.  Nonetheless, I found it hard to score more than 98%, partly because of the occasional tricky problem; and partly because only the game continuation is counted as correct, and there is often more than one way of capturing a piece, for example.  The games from which the problems are are sometimes between lowly rated or unrated players, so the game continuation is not always the best. Nonetheless, in Learn mode (an untimed test), I was awarded a totally meaningless rating of 2290.

A minor gripe is that when the problem has Black to move, Peshka (the interface used by CCFCP) displays Black at the bottom of the board and White at the top.  There is an icon on the lower left hand side of the board to flip the board round; but there is no box that I can check to say that I always want standard diagrams with White at the bottom. Another minor gripe is that there is no easy way of selecting a particular problem by number.  It is possible to select a particular problem using the row of buttons just above the board.  (In the diagram above, these buttons are green for the problems that I have completed, and grey for the others.)  However, there is no space to number the buttons, and you have to click on the button to see the problem (AKA Task) number.  It would be a big improvement if hovering the mouse over a button brought up a bubble showing the problem number.

By clicking the Play icon, it is possible to enter moves that are not part of the solution and receive replies from Crafty, the onboard computer engine.  However, there is no way of entering alternative defences, and getting Crafty to show you how to defeat them. However, even if there was a way of making Crafty switch sides, that would still be more time consuming than simply being given the complete solution as in a problem book. Having to type in the solution makes sense if you are tested on all the reasonable defences, but not if you are only tested on the least challenging one.

The problems in CCFCP are sorted by:

The “decoy of a king into a mating net” problems are all trivial mates in 2, in which the king is decoyed to a square on which it can be mated.  The “intercepting a piece defending another piece” problems are mostly trivial removal of the guard problems.  The “distraction of a piece defending another piece” problems are mostly trivial problems in which the line of defence of a piece is intercepted.  Clearly, this list is only a subset of the tactical motifs that are included in most elementary tactics books.  Given that most of the problems are so trivial, it would be better if they were in random order of motif.

The CCFCP software labels the problem folders as “Ctart for beginners2,”  but beginners need proper solutions, so I do not believe that this product is suitable for beginners. (Indeed, the absence of proper solutions is likely to cause some difficulty even for strong club players.)  Beginners would also need the problems to be reliably sorted into order of difficulty.  They also need to become accustomed to standard chess diagrams (with White at the bottom), and used to spotting simple tactics from both sides of the board. Strong club players are not likely to want a set of highly repetitious problems that are mostly at Bain level, with hints, and without proper solutions for the few tricky ones.  I cannot recommend this product to anyone!

More positively, having bought CCFCP, I did work my way through all the problems, and I believe there was some value in that.  I also got plenty of practice at solving problems with the diagram “the wrong way round,” which seems to be a necessary survival skill for the online servers.  I was also able try out the Peshka interface.

I am sorry to have had to give my first negative review, but the tactics books that I have recommended are all very much better than this product.
Posted by Geoff Fergusson at 01:01