In this post, I present some chess positions that illustrate how being able to solve simple problems faster helps with solving more difficult problems. 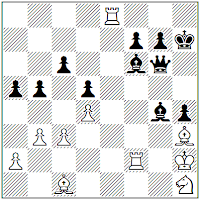 This is one of my favourite positions from Fred Reinfeld’s 1001 Winning Chess Sacrifices and Combinations (#264).  It is a very simple example, three moves, with no sacrifices. The underlying motifs are elementary, but the solution is not easy to see: 1...Bxh3 Kxh3 2.Qg1 and Black wins the B or N.  We have three motifs here:  line clearance, removal of the guard and double attack. 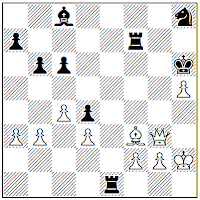 This position from Al Woolum’s Chess Tactics Workbook looks suspiciously like a simplified version of the previous example.  Here you just have to spot the queen fork on g8.  There is, however, also the easier to see queen fork on d6, which wins just a pawn. Woolum gives the d6 fork as an alternative solution, but it is really a false trail.  If you do not see the fork on g8 very quickly, you have very little chance of solving the previous example over the board.  However, if you spot the queen fork almost instantly, you should find the solution to the previous example.  You should certainly always look at all your captures, and your opponent’s captures in response.  You then just have to see that the g file has opened, and that target square for the queen and the knight have both lost their defence.  Bingo! 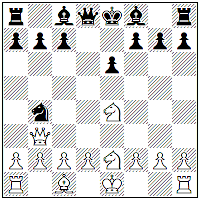 I believe that this example comes from CT-ART.  It is very simple, but again tricky to see. The important things to note are that the White queen is defending c2 against a knight fork, and the White N on e4 is loose.  1...Qd5 attacks both the defender of c2 and the loose knight.  At first sight, it looks as though White can neutralize both threats by exchanging queens, but the recapture exd5 hits the loose knight, and the defence has gone from c2.  In his book Understanding Chess Tactics, Martin Weteschnik calls an exchange which replaces one attacking piece by another a reloader.  The replacement of the Black queen by the Black pawn as the attacker of the White knight is an example of a reloader. 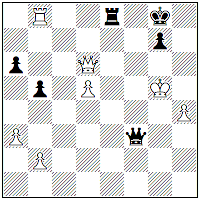 Here is a simpler example which forms the conclusion of a famous Tal combination (Tal - Evans Amsterdam 1964).  The full combination is discussed in Weteschnik’s book.  The important thing to note here is that the White queen is defending the White rook against the attack by the Black rook.  Black plays 1...Qf6+ forking the White queen and king. Again, at first sight, it again looks as though White can neutralize the double attack by exchanging queens and pick up Black’s hanging rook.  However, as in the previous example, the recapturing pawn reloads, rechecking the king and gaining the tempo Black needs to capture the now hanging White rook.  This example is very similar to the previous one.  We can say that they both have the same underlying pattern  If you can solve one of these problems very quickly, you should be able to solve the other quickly. 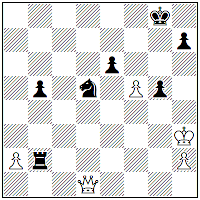 Here is another of Weteschnik’s examples (Bellon Lopez - S.Garcia, Cienfuegos 1976). Black plays 1...Rg2.  If the White king takes the rook, the Black knight forks king and queen.  Otherwise, 2...Nf4# is threatened and White can defend against this threat only by giving up his queen for the knight.  How do you spot this one?  Lots of practice with problems where you leave pieces hanging, and lots of practice with rook and knight side file mates is going to help.  If you are playing a slow time limit game, it is always a good idea to make a quick check of all your alternative moves, no matter how silly they look.  If you do that, and you can spot the rook and knight mate almost instantly, you should find the solution.  (It is also a good idea to make a quick check of all your opponent’s replies before making your move, which should stop you falling down this particular hole!) 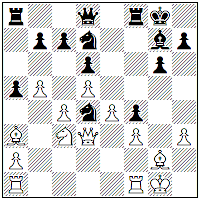 Here is an example from Dan Heisman’s Back to Basics: Tactics.  In the previous example, we were able to leave a rook hanging because of a knight fork.  Here we can leave a knight hanging because of a discovered attack.  Black plays 1...Ne5.  White cannot take the knight on d4 because of 2...Nxf3+, and has to leave the defence of the pawn on c4. 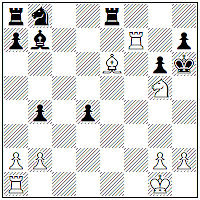 Here is another example from Heisman’s book.  The Black bishop and h7 pawn are both attacked, but if White takes either, he looses his knight.  There is a simple solution: defend the knight with 1.h4.  We now have a double attack on the bishop and are threatening another rook and knight side file mate.  This is a very nice example of a defensive move creating a double attack.  Even simple examples have a lot to teach! 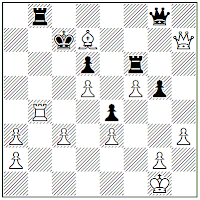 My final example is the spectacular conclusion of another problem in Reinfeld’s book (#407).  The solution to the position above is very simple, but not easy to see from several moves earlier.  White plays 1.Rb7+ Kxb7 (other moves drop the queen).  He follows this up with 2.Bc8+, which is double check, so the king must move.  If Black takes the bishop, he cuts off the defence of the queen, if he does not, the bishop cuts off the defence of the queen!  If you cannot spot the solution quickly from the diagram above, you have very little chance of solving the problem in Reinfeld’s book!
Posted by Geoff Fergusson at 05:27