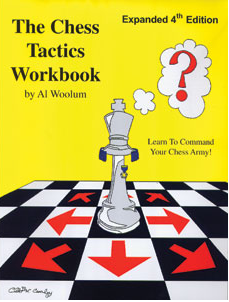 I used Al Woolum’s Chess Tactics Workbook (Expanded 4th Edition) for my next tactics training experiment, so I will give it a brief review.  The book has 792 problems in the main section, plus 24 triple Lloyds, 24 chess mazes, and 30 regular chess problems in the “Canadian Corner“, which originates from Jeff Coakley.

The book is intended to be used as instructional material for kids, and begins with the moves of the game.   A majority of the problems are easy, but a significant proportion are not at all easy!  John Bain’s Chess Tactics for Students is much easier, and is more suitable as a first tactics problem book, or as first speed training book for more advanced players.

The book is well presented with large and exceptionally clear diagrams.  A large majority of the problems look like ordinary chess positions, but there are also some contrived compositions.  There are a significant number of exact duplicate problems or near duplicates (e.g. the same position with another move added at the beginning), but less as a proportion than in Bain.  I also recognised a number of problems from Reinfeld and other books.  All the problems are White to move - which is not ideal - it is necessary to be able to see tactics from both sides of the board!  However, if you have other tactics books, this should not be too much of a problem.  There are some errors in the diagrams, and many errors and omissions in the solutions, but my next post provides an errata, which I believe fixes the important errors and omissions.

None of these shortcomings are show stoppers.  Overall, the book provides excellent training material at a good price per problem.  It is well suited to training aimed at spotting simple tactics very quickly, as advocated by Dan Heisman.  [See Dan Heisman's 7-10 Basic Tactics Books for my review of all Dan's recommendations for this purpose.]  The book appears to be distributed only via specialist chess suppliers - I got mine from the London Chess Centre.
Posted by Geoff Fergusson at 10:08